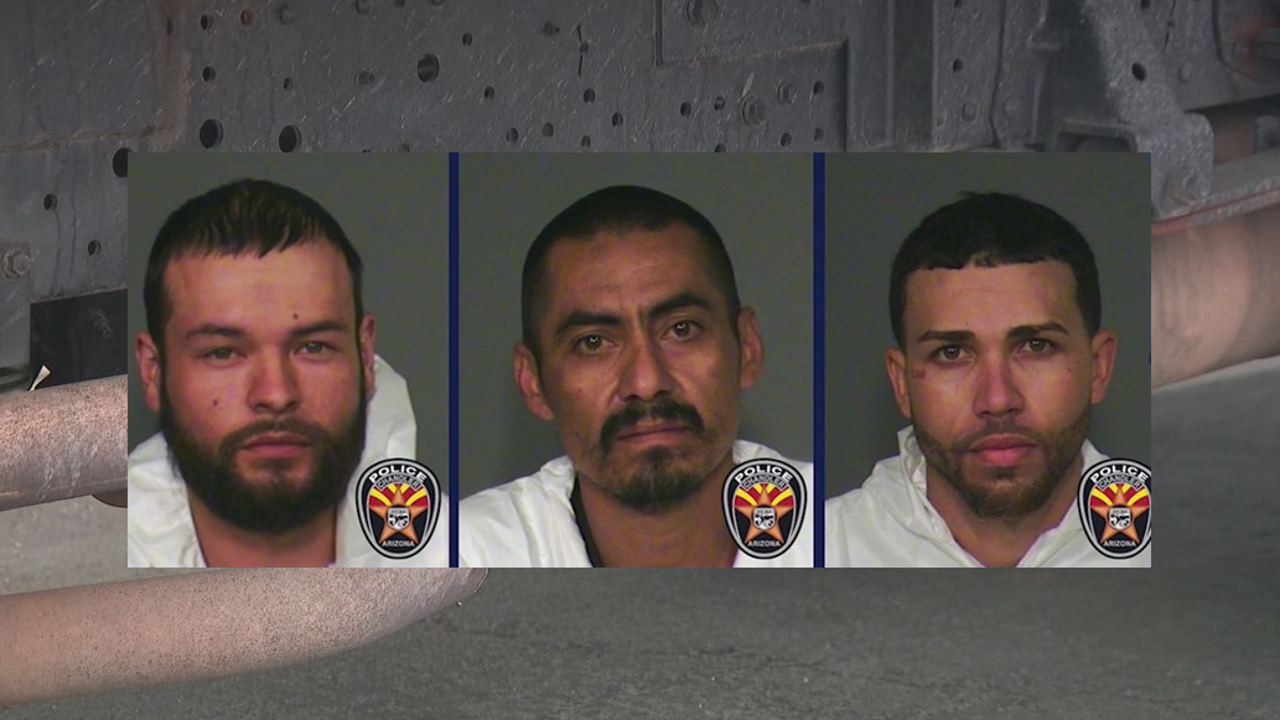 The suspects, identified as Robert Canez, Jesus Banuelos and Tevon Kroncke, were arrested in February by Chandler police. FOX 10’s Justin Lum has more on the body camera video taken during the arrest.

Chandler, Ariz. – Three men were stopped part of a series of thefts of catalytic converters in Chandlerpolice said.

Chandler Police say officers responded to Alma School Road and Chandler Boulevard on Feb. 27 after a person said he interrupted three suspects as they stole a catalytic converter from his vehicle. During the attempted robbery, the suspects allegedly pointed a firearm fitted with a laser sight at the victim before leaving the scene in a black BMW.

“I screamed like, ‘Hey!’ and I saw a gentleman turn around with a gun pointed at me,” said the victim, Luis Alejandro. “So I just put my hands up, I backed up, I tried to take cover.”

Alejandro is a landscaper who is now missing a $1,500 coin from his work truck.

Police located the BMW on Chandler Boulevard and attempted to stop it, but the BMW did not stop.

The suspects then abandoned the BMW in a commercial parking lot near Gilbert Road and Chandler Boulevard.

“With the description of the victim, police searched local businesses and located and arrested the three suspects,” police said in a statement. The suspects have been identified as Robert Canez, Jesus Banuelos and Tevon Kroncke.

Robert Canez, Jesus Banuelos and Tevon Kroncke have been arrested in connection with a series of thefts of catalytic converters in Chandler, police said.

Ten catalytic converters, a pistol and a battery-powered saw were found inside the BMW, police said.

“Chandler Police have linked Canez, Banuelos and Kroncke to two other thefts of catalytic converters that occurred on February 27, 2022 in the town of Chandler,” police said. “Chandler Police continue to investigate Canez, Banuelos and Kroncke for multiple thefts of catalytic converters in the town of Chandler and around the valley.”

Suspect admits money was the motive for the theft

When Chandler Police detectives question three suspects in a series of crimes involving thefts of catalytic converters, one of the suspects, identified as Tevon Kroncke, said money was the motive.

“Basically I went out to make some money,” Kroncke said.

Another suspect, Jesus Banuelos, said he had never cut a catalytic converter until that morning.

“OK, how did you know how to cut it?” said Inspector Cassandra Ynclan.

“I had watched,” Banuelos said.

“What did you watch?” says Det. Ynclan.

The third suspect, identified as Roberto Canez, did not speak much to police.

The three suspects have been jailed and are charged with armed robbery and burglary. Banuelos also faces multiple drug charges after police said he had fentanyl in his possession when he was arrested.

Police said they arrested nine suspects in connection with thefts of catalytic converters in the past 30 days.

“It’s a problem right now,” an officer said. “We’ve made arrests, we’ve done everything, and they keep coming back. Like, we’ve arrested so many of these guys. We’ve done detail, saturation detail, where we’ve done undercover detectives neighborhoods work and we get them, then we delete one, and another one pops in. It’s like weeds, basically.

Get news alerts in the FREE FOX 10 News app. To download for Apple iOS or Android.

More and more businesses in Michigan are going cashless. But customers who only accept cash need not worry.