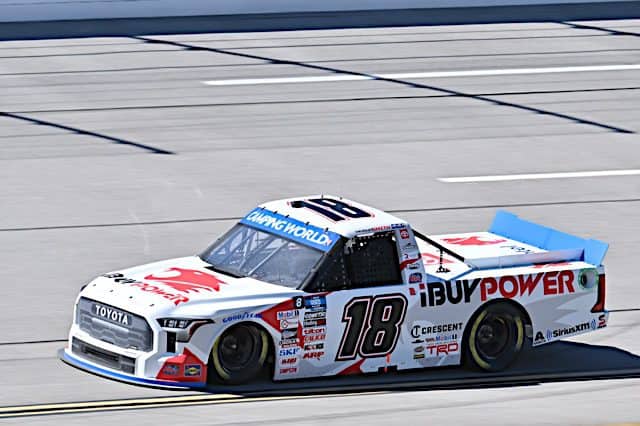 The move not only means a well-deserved move to the Xfinity Series for Smith, but also creates a hole for Toyota, as Kyle Busch’s move to Richard Childress Racing means Toyota loses its best – and truly the only – feeder team in the world. Truck Series.

David Wilson, president of Toyota Racing Development, had expressed his intention to keep all current Kyle Busch Motorsports drivers within the Toyota family – Smith, Corey Heim and John Hunter Nemechek. Smith’s move to Kaulig threw a wrench into that.

Nemechek will more than likely fill one of Joe Gibbs Racing’s Xfinity Series seats, as there will be at least one open seat – No. 19, which Brandon Jones will leave at the end of the season to join JR Motorsports.

Heim will more than likely remain in the Truck Series for another season, but if TRD intends to keep him, they need to find a team that will develop him to progress in future seasons, and at the moment there is no no teams to do it. , unless a team changes manufacturers (ThorSport Racing and Halmar Friesen Racing are Toyota teams, but both are not true development teams).

There are reports that David Gilliland Racing will return to Toyota and Heim will join for the 2023 season. That would be the best case scenario for Toyota – getting a multi-truck team to change manufacturers and one of its drivers to stay. changing teams. Because other than that, TRD riders who want to upgrade will change manufacturers or take the bold leap straight to the Xfinity series.

Although the former seems like the more likely option if that were the case. Smith is another future former Toyota driver to move to Chevrolet. Drivers like Noah Gragson, William Byron and now Jones are all drivers who switched from Toyota to Chevy (and look where they are now). Toyota has had a serious problem finding places in the top series for its talent pool, and now its number one feeder team in the Truck Series is also on the way out.

The question then becomes: who will replace Smith in truck #18? Will TRD let yet another driver get away? KBM is now at a crossroads to find new drivers. The team could also try to bring two-time ARCA Menards Series East champion Sammy Smith back to Chevy, but other than Ty Gibbs, Smith is a driver that TRD will fight everyone to stay at this point.

So what about Chevy development? In ARCA, drivers such as Nick Sanchez, Daniel Dye and Rajah Caruth are tearing up the track (they are the top three in ARCA points heading into the final this weekend in Toledo), but all will likely stay another year to develop even further. . The closest person to get on would probably be Dye, but GMS Racing would put him in a truck sooner than let KBM pull him.

Not only is Toyota fighting to keep its drivers from changing manufacturers, KBM now has to find a TRD driver who can either jump ship with the team or now has to, in essence, scramble to find a Chevy driver to place in No. 18 next season.

2023 is going to be a big year for Toyota as it needs to find drivers and teams, preferably as soon as possible. And we all thought the silly season was winding down after Kyle Busch was announced to RCR.

Loans in case of difficulty: what is it?