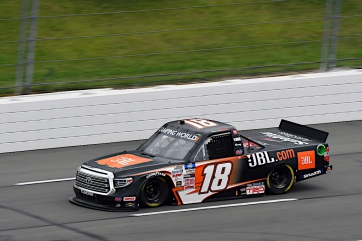 The other two regular season races take place on single tracks. Is one of them more of a joker than the other?

“Not really. Knoxville is obviously a dirt road so it’s going to be chaotic just like the Bristol dirt was. We had a very solid truck on the Bristol dirt, going through the pitch and we ended up being knocked out. I think we’re going to have to play it very conservative, we’re right in the playoff bubble. We’re pretty good, so all we really have to do is survive now. “

After running on dirt for the first time in Bristol, are you looking forward to Knoxville?

“Of course my JBL Toyota Tundra was a rocket ship in Bristol, which really made it more fun. I look forward to Knoxville, it will certainly be a completely different atmosphere than Bristol. I am ready for whatever he has in store for us.

As you prepared for the race in Knoxville, how do you think it will be different from what you experienced in Bristol?

“I don’t think the race will be much different, I think there will be two lanes. The SRX just ran there a few weeks ago and I watched this race obviously there was a bit of two lanes there and you could run around each other and not crash. I have a feeling that there are going to be two grooves, where we can run side by side quite cleanly. I think it’s going to drive a bit like a short track on a Saturday night to be honest with you.

JJ Watt and Chandler Jones could be a dangerous duo