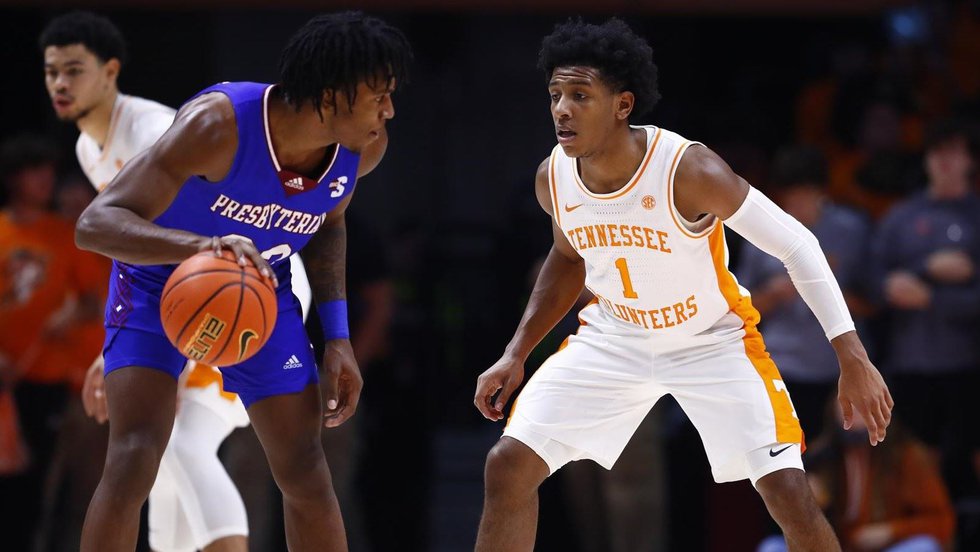 Chandler ties record as No. 13 Vols down Presbyterian, 86-44

The Vols have shown a particularly stingy defense as they have throughout the season. Chandler became the seventh Vol to reach the seven steals mark and the first since Vincent Yarbrough on Dec. 22, 1998. The freshman had 12 steals in his last two games and 15 in his last three games at the interior of the Thompson-Boling Arena.

Chandler’s terrific night saw him record 15 points on 7-of-14 shooting from the field. He added seven assists and his fifth block of the season.

Powell delivered a powerful punch off the bench, shooting 5-for-5 from 3-point range to tie Chandler with 15 points. Powell became the first Vol to shoot five or more triples in a clear round since Jordan Bowden in December 2017.

Victor Bailey Jr. also scored in double figures on Tuesday with 14 points. He shot strictly three and hit 4 of 8 from deep, while knocking down a pair of free throws. Santiago Vescovi finished with 11 points and four assists.

After the offensive onslaught in the first half, the defenses tightened to start the second period. In the first nine minutes, the teams combined for just 17 points. Tennessee forced Presbyterian to seven turnovers, four of which were steals. As the offenses shook off their early struggles, Tennessee found themselves on another long scoring streak. He built up a 16-3 margin in 5:12 with six different Vols coming into the scoring during that span.

The Vols and Presbyterians exchanged blows for the first five and a half minutes of the game, but as the defense found its rhythm, so did the offense. Tennessee went on a 15-3 run lasting 4:31, during which Bailey Jr. knocked down a pair of 3-pointers and sank two free throws. The Blue Hose replied with a flurry of 11 points, but a determined willing team would not be deterred. Tennessee held Presbyterian scoreless for the final five minutes and had 17 points on 7-of-8 shooting from the field.

Then the Vols hit the road for a two-game road trip. Tennessee begins its journey by taking on Colorado in Boulder, Colorado at 2 p.m. ET on Saturday. The match will be televised on FOX Sports 1. The Big Orange will then venture to the Big Apple where they will face Texas Tech in the Jimmy V Classic at Madison Square Garden on Tuesday, December 7 at 7 p.m. ET on ESPN.

MAKING IT RAIN: Tennessee made 14 threes in the win, including nine in the first half. Six different Flights connected on triples Tuesday. After averaging 6.6 3-pointers per game for the 2020-21 season, the Vols are averaging 10.2 per game over six games this year.

LOCKOUT: Defensively, Tennessee’s interceptions have also seen an uptick this season. The Vols have 13 interceptions against Presbyterian and are averaging 10.5 per game this season, up from last season’s average of 7.3 per game.

STOP THE SHOOTER: Presbyterian’s Rayshon Harrison, who entered the game tied for 16th in the nation with 21.3 points per game, was limited to just seven points on 3-for-10 shooting on Tuesday.

David Chandler has helped thousands of people find the stars