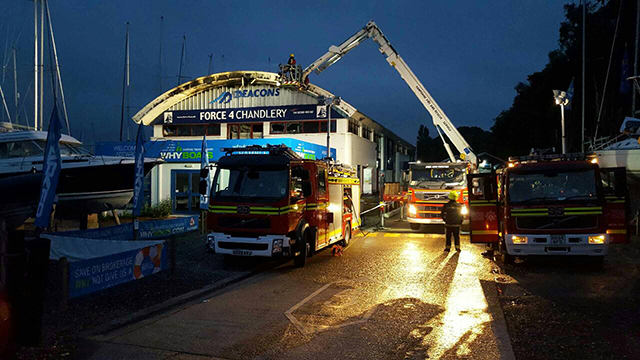 No one was injured in the blaze, which started in the early hours of Monday, June 13, causing extensive damage to the building.

â€œWe are relieved that the fire occurred when no one was in the store,â€ said owner Peter McLuskie, â€œhowever, the building and its contents sustained significant damage.

“Our well-known and experienced team of deacons, including Principal Pip Johnstone, and team members Sarah, Scott, Andy and Steve, although affected by the fire, were able to relocate temporarily, to work alongside from the staff of our existing Swanwick Chandlery, which was refurbished earlier in the year.

â€œSwanwick Chandlery is just a two minute walk from Deacons Boat Yard across the bridge. They look forward to welcoming their customers to this alternate location until they can safely return to a refurbished store at Deacons Yard. ‘

Manager Lawrence Parr said a date to reopen the store damaged by the fire has yet to be set.

Force 4 Chandlery is the largest Chandlery in the UK and has been around for over 35 years.

They have 15 stores in places such as Deacons, Swanwick, Bristol, Cardiff, Southampton and Plymouth.

Firefighters are investigating the cause of a fire that damaged a ship fittings at a Bursledon shipyard last night.

What are the most effective gelcoat cleaners in the fight against yellowing of the waterline on boat hulls?

A large fire broke out yesterday at an auto shop near the Medina Boat Yard in Cowes.

A fire that devastated a 34-foot yacht at Deganwy Quays Marina was caused by a power outage, fire investigators have …