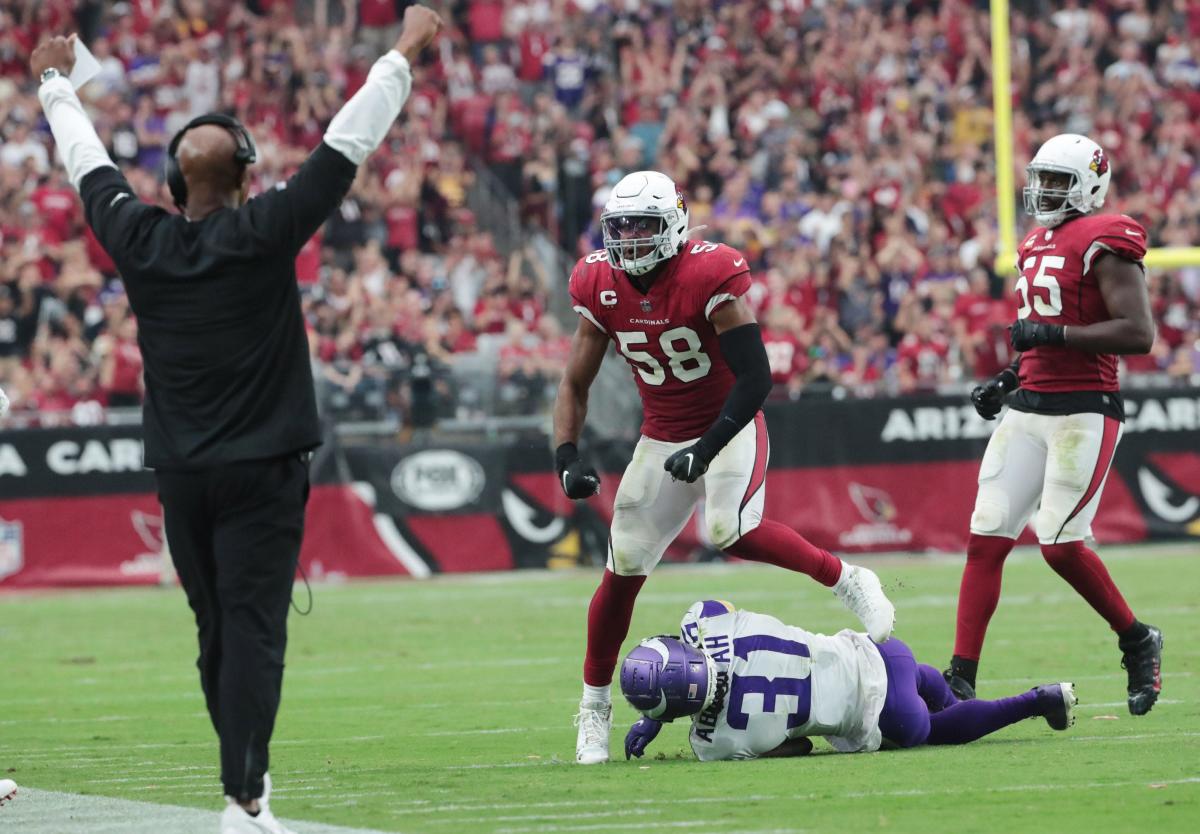 Arizona linebacker Jordan Hicks was selected as the NFC Defensive Player of the Week after making 13 tackles and a pair of sacks against the Chicago Bears.

It’s a nice recognition for the unsung MVP of the Cardinals defense.

“Jordan Hicks is the heart of our defense,” Chandler Jones said at a press conference Wednesday. “He’s the quarterback for our defense.”

Hicks has 95 tackles this season, which puts him in the NFL’s top 20. None of the players ahead of him on the tackle list can match his five sacks.

Production was only part of the story.

Hicks is the kind of cultural engine that any organization would be blessed with.

During the offseason, he restructured his contract to make less money just so he could stay in Arizona.

Then the team recruited a guy to take their job.

Hicks asked for a trade, but that didn’t happen.

His teammates chose him as captain.

He resumed his spot at starting inside linebacker.

And he is having one of the best seasons of his career.

“There’s no one I respect more in this league…for having the grace, the poise and the professionalism that he’s used throughout this process,” coach Kliff Kingsbury said. “It’s a business for all of us, and we understand that. There are decisions to be made, and sometimes they don’t go your way. But he worked his cue and came out and had a terrific season.

Hicks is a key part of veteran leadership that puts the Cardinals atop the standings with the best record in the NFL.

“When you have veteran leaders like that, they’ve seen everything you can see…it’s really invaluable,” defensive end Zach Allen said.

Hicks has been in Arizona for three seasons.

Players “who have been in a system for two or three years, they almost become like mini-coaches,” Jones said.

“They’re able to take what they’re taught and broadcast it to young people who don’t understand… When there’s a little question that you maybe can’t ask your coach, one of those guys who has been in the system can step in and say, “That’s the right answer” or “That’s what you’re doing.”

Hicks clearly knows what to do.

He is the only player in the NFL with 90 or more tackles and five sacks. He also has six tackles for loss, five quarterback hits, one forced fumble and two fumble recoveries.

His five sacks are a career high and they represent something of a hot streak.

Hicks, a seven-year veteran, had never recorded two sacks in a game before this season.

He has now done it twice in seven weeks. (In addition to twice sacking Andy Dalton from Chicago, he had two sacks against Cleveland on Oct. 17.)

Hicks has also been consistent. He hasn’t missed a game since arriving in Arizona in 2019.

“Having Jordan on our defense is very helpful, very beneficial to us, of course,” Jones said.

It was his first NFC Defensive Player of the Week pick.

Finally, a little recognition for the unsung MVP of the Cardinals defense.

“He’s been a great leader here since he came here,” Kingsbury said. “A great person, a great player and as staff we were all very excited to see him receive this.”

There’s a lot of Moore where that came from. Subscribe to receive videos, columns, opinions and analysis from the Arizona Republic’s award-winning sports team.