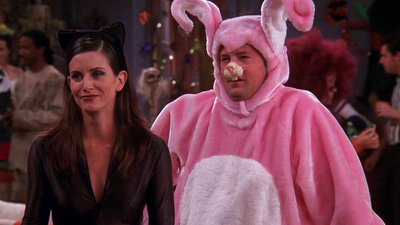 Could we be more excited about all things “friends”?

If it’s related to our favorite group of friends, we’re in.

Over the past year, we’ve been blessed with more “Friends” content than we’ve had since the show ended in 2004.

And just when you think you’ve seen it all, a very iconic character returns to social media.

Popular TikTok musician @jaxwritessongs decided to write a song about a couple she thinks should have made it to the end of the show and ended up living happily together forever.

Instead of the classic “I’ll Be There For You” theme song, Jax substitutes the lyrics and sings it from the perspective of Janice, Chandler’s most iconic girlfriend.

And she even has a very special collaborator who joins her in the second part of the song:

Even though we couldn’t see anything in this video, any “Friends” fan could tell you exactly who that voice belongs to!

While we’re pretty happy with how the series has turned out, hopefully in a parallel universe, Janice and Chandler live happily ever after!

It also reminds us that we love a surprise cameo, which this series also did so well.

Here’s a quick refresher in case you forgot some of the famous faces that popped up next to our favorite group of friends: